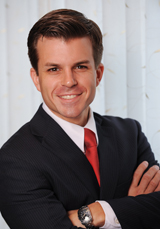 Former Dade prosecutor, handled thousands of cases, also worked in the legislature drafting many of our criminal laws.

Matthew E. Ladd is experienced representing those charged with all criminal offenses from simple misdemeanors to complex felony prosecutions.

He is a former prosecutor with the Miami-Dade State Attorney’s Office. There, he prosecuted thousands of cases ranging from misdemeanors to felonies including violent crimes, child abuse, theft, and murder.

After fulfilling his commitment to State Attorney Katherine Fernandez Rundle he served House Speaker Marco Rubio in the Florida House of Representatives. In the Legislature.

Mr. Ladd is affiliated with the Kiwanis of Little Havana and contributes to the Police Benevolent Association. He is recognized in the community as an aggressive advocate who maintains a strict focus on his client’s satisfaction.  He is a graduate of Syracuse University College of Law and The Marshall University Lewis College of Business.